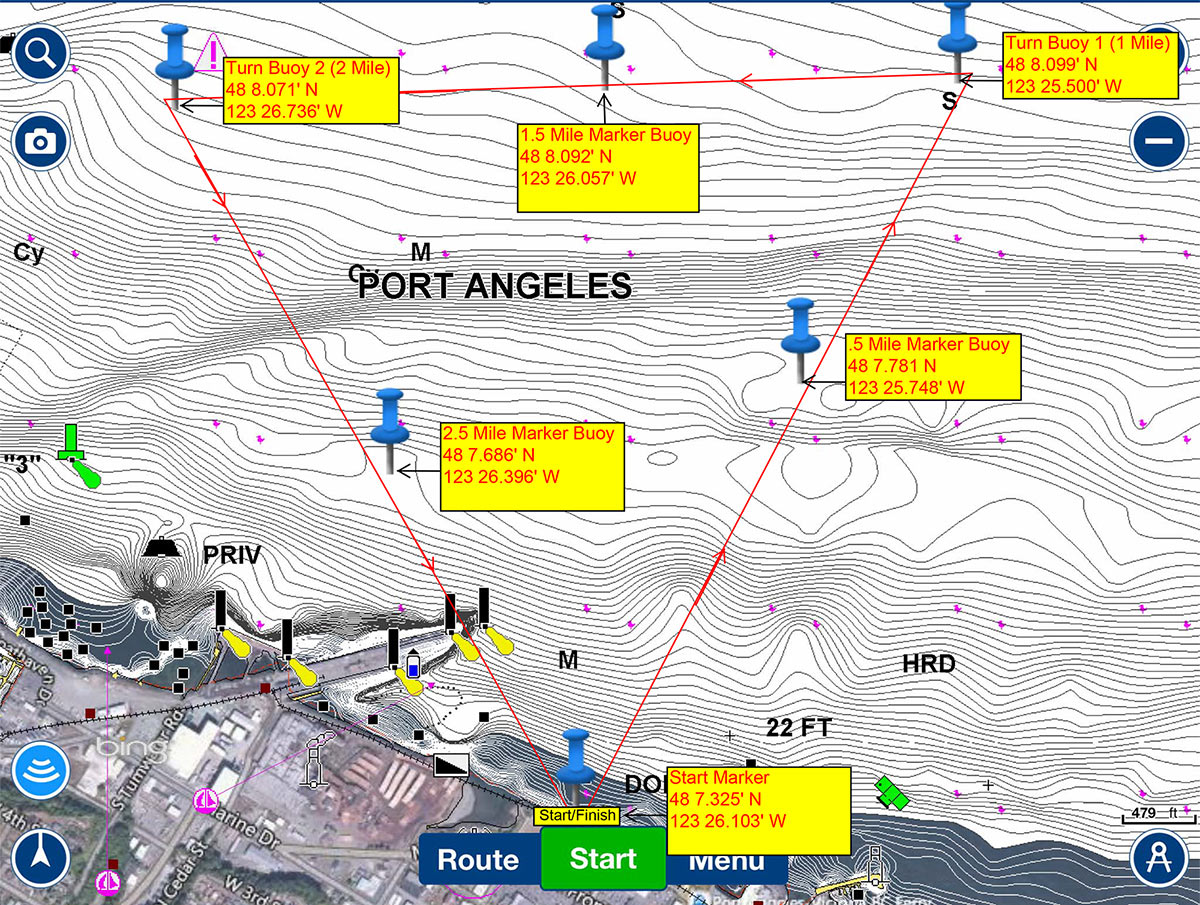 The three mile course starts and finishes at the staging area at Railroad Ave. and Oak St., just 900 feet west of the ferry terminal. The course is in the shape of an inverted triangle that points south.

To ensure fairness and safety in the Kayak Leg, ALL BOATS will be inspected on race day for compliance with the following 3 rules.

The following boats are NOT allowed in ANY division: a) "whitewater" river boats; b) Olympic "Downriver" racing boats; and) Olympic K-1 flatwater "racing" boats.

Please note: The water at the Port Angeles Harbor is quite cold. It averages about 50° ± year round. At this temperature, sudden immersion without proper thermal protection can cause shock and hypothermia within 10-15 minutes and, if this chilling state persists, it can be life threatening.

Be sure you understand that, as a race participant, you are solely and completely responsible for your own safety when participating in this race. In rough water conditions, it is sometimes difficult for safety boat personnel to see a capsized kayaker in the water, or they may be busy handling other capsizes. It is possible that, if you capsize, you may not receive help from a safety boat for an extended period of time.

Impact of Weather on the Kayak Leg

The Kayak leg is conducted only in acceptable wind & water conditions. Be aware this leg may be canceled in case of seriously challenging weather. In the event of extreme wind conditions (18-20 or more knots), this entire leg of the race may canceled at any time.

NOTE: There will be safety boats patrolling the race course plus some boats anchored at various locations along the course. If you need assistance, please notify one of the safety boats. This is for your safety and as a courtesy to the safety officers and volunteers who will have been on duty on the water all day.

All boats must be dropped off and inspected by a race official between 6:00 p.m. and 10:00 p.m. on Friday, September 23, 2016. The race provides overnight security guards on the beach.